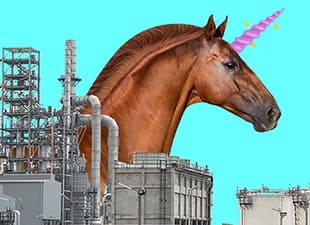 Why the real unicorn of insurtech will emerge from commercial, not personal

With Intellect Risk Analyst, underwriters could soon have 70% more time on their hands. What better time to start an obscure, artisanal hobby?

We are seeing a flurry of advances in the InsurTech space be it product innovations, reimagined service experience or reduced premiums for customers. A question I often get asked is why personal lines in insurance is blazing ahead of commercial lines when it comes to innovation. The easy answer is to just follow the money, specifically the funding trail.

Venture capitalists whose metric for early stage startups is growth have rushed to personal lines as it is easier to show the volumes. Personal lines InsurTech startups have focused on the distribution side of the problem – lowering the premium to increase the volume of transactions. Their lever for this rapid growth is a slick UI and a digital broker; betting on increasing throughput, consequently the adoption. In the subsequent rounds of funding, when the motive of the investors shifts from growth to profit, InsurTech companies will realize that distribution is only one part of the equation, and not the core of the problem.

InsurTech companies are amazing and they all solve a part of the problem. However, to solve systemic problems, companies need to attack improvements in the loss ratio (i.e. the product problem not the distribution problem). More than the profitability of the insurer, the ripple effect across the insurance industry and other adjacent industries are massive (for example, think of the impact on workplace safety as opposed to underwriting workers’ compensation). So, for systemic industrial change, I think the Commercial industry is better placed than personal, albeit it will take a longer period of time.

What does the anatomy of a commercial insurtech unicorn look like?

Like all quick analyses I look at this in two dimensions

Both of these point to Commercial as a better option.

The sharing economy is drastically reducing asset ownership (more on the data of this in my next blog), with car ownership in urban areas the most cited example. This is a loss for personal auto and a gain for commercial auto (the car is going to be a computer and cyber risk from the manufacturer will likely become the highest coverage). This trend exists in other areas including home ownership, renting of equipment, physical storage, cloud computing etc., but it is not talked about as much.

The second shift I see happening is a fundamental change in the product structure from static to dynamic. Across all lines, the change in what you need to know upfront and what you will know throughout the life of the policy will change. The usage-based policy (sort of pioneered in parts in personal auto) will start to become the norm in Commercial, despite having only a minuscule footprint currently (remember these are exponential changes and the initial doublings are not noticeable – think of the 0.01 mega pixel camera becoming a 0.02 mega pixel camera).

Executed with IoE and machine learning

Let’s have a look at how you can execute on these trends.

Firstly, this changes current 1.5 to 2 touch points with the carrier to 365 touch points at least. The key touches in this sense are not human touches but data driven touches. Both the upfront and post-bind data, the certainty and access of data on Commercial is better, with access to Personal lines data prone to consent due to privacy reasons (at least until DNA Sequencers take privacy out of the equation). Meanwhile, in Commercial, even if you were to replicate the existing forms (which you should NOT!) you can probably find 50-60% of the general company, financials, locations, and parts of workers’ compensation, commercial auto, general liability and the directors and officers data to be as little as their names and addresses.

However, under a usage-based policy even knowing 100% of the upfront static data is not enough, it is the dynamic IoE (Internet of Everything) data that shifts the paradigm. These IoE solutions that I talk about have already reached a level of maturity in industries such as mining, manufacturing and construction. They have been deployed in cutting machines, heating/cooling equipment, cranes, thermal cameras, traditional cameras, forklifts, trains and guided vehicles for years. This has enabled a level of sophistication in IoE solutions, which has data from running mission critical systems (PLCs, data loggers, historians etc.)

But why would a manufacturer or a construction company give a carrier this data?

“Well, in order for a Commercial InsurTech to be a unicorn, they need an edge to motivate the company to get the data and show that they are really serious about loss prevention and safety with appropriate pricing discounts and pay-as-you-go policies.”

Come to think of it, the true financial incentives to increase safety and decrease risk have never existed before! This has to come in to create a win-win scenario between the insured, their employees and the carrier. Despite the Commercial InsurTech not taking as much premium upfront, it will get to unlock many other opportunities by being proactive, simply due to the data and touch points they have.

As you may have realized by now, other than being proactive about loss prevention, what a Commercial InsurTech really changes is that instead of insuring someone/something like the insured (“broad risk pools”) to someone exactly you (i.e. “pool of one”). One can argue this can be achieved on the wellness side with device data, but the industrial automation data has been collected and proven across many industries for 20 years now. The wellness data is just starting (plus that is more on Life and Health).

So far, we have got to the shape of this proactive and personal Commercial InsurTech unicorn. However, it would be remiss of me to not briefly talk about its distribution structure.

A traditional carrier spends around 30%+ of Direct Written Premium (DWP) between expenses and commissions to “touch” an insured 1.5 to 2 times a year. Now, if you want to be able to continuously “touch” an insured both the acquisition, retention and renewal structure has to be re-imagined bottom up in order for it to scale. One thing is for sure that in a world of IoE and machines, “human” intervention is minimal, they simply will not be able to handle the volumes and variety of data. So, there is no chance a Commercial InsurTech unicorn will be intermediated.

“Adopting IoE and Machine Learning is not just about jumping on the bandwagon of a new technology; it’s about adopting a new mindset.”

And none of this is just gleeful optimism; I will admit to there being regulatory hurdles. Despite having regulatory “sandboxes” setup, it is a massive step up for traditional regulators who are grounded in easy-to-regulate forms and structured data to switch to on-the-fly decisions, price adjustments made by machine learning algorithms with data flowing from the IoE devices. I see the legal and regulatory skills needed to maneuver the Commercial InsurTech company to being a unicorn to be as big, if not bigger than the technology and algorithmic skills. This cannot be underestimated. My hope here is that ultimately any regulatory body remembers who they are regulating for. The insured.

To sum it up

You can see an outline of what a potential Commercial InsurTech unicorn would look like. Instead of being reactive, impersonal and intermediated, the successful company will likely target loss ratio improvement with proactive and personal service, powered by a large network of data partners, commercial IoE partners and machine learning partners. In order to operate at a global scale, this unicorn will have to have low cost per digital touch and hence it will likely be disintermediated.

There is already a large (and growing) opportunity for an InsurTech to target major commercial segments in commercial packages, commercial auto and workers’ compensation. The solution options are massive, but the problem space is even bigger. As a word of caution, it isn’t just about technology here; the ability to carefully guide the company through the many regulatory hurdles is also essential.

I look forward to seeing the first commercial insurtech unicorn, wonder who it would be?

Want to see our products in action? Let our experts help you get started

This site uses cookies. By continuing to browse the site you are agreeing to our use of cookies. Accept